National Geographic Channel takes a funny look at the Internet’s most shocking viral videos in April 2014 when it premieres Science of Stupid, a show that explains why stunts go wrong when amateurs try to copy them. Each episode will examine stunt videos with disastrous endings and explain in scientific terms what factors caused the stunts to fail.

With the boom of Twitter, Facebook and YouTube, where people find it easy to post and share interesting information and content, it’s no wonder that some are foolhardy enough to try the crazy stunts that they see professionals do. Such attempts often have catastrophic results—which in turn are posted in the hopes of going viral! Science of Stupid makes sense of this nonsense by showing the necessary setup to make the stunt successful along with what the people in the video did wrong to make things go haywire. It uses visual diagrams to explain the scientific principles applied—or in these cases, not applied—during each attempt.

Each episode of Science of Stupid features a variety of stunts posted on the Internet, ranging from the dangerous to the silly. Thrill seekers collide with the invincible laws of physics as the show explains what happens when two women jump off the roof into a swimming pool, and how a potato canon can cause real damage to a man’s groin with a muzzle velocity of 300 kilometers per hour despite its innocuous name. Eating a spoonful of cinnamon may sound easy, along with other Internet myths that people might thoughtlessly want to try out for themselves, but Science of Stupid outlines the biological, physical and engineering mistakes behind each failed attempt. 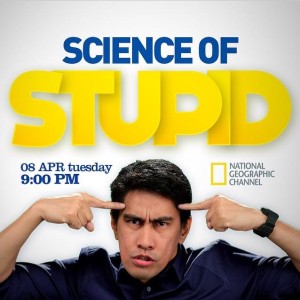 Science of Stupid is a 14-part series hosted by Internet and TV sensation Ramon Bautista, whose likeable “everyman” humor will charm any viewer as he sets up each stunt and explains the science behind it. As the best example of one who has achieved Internet fame, he allows viewers to understand the skewed motivations of these wannabe daredevils while cracking jokes that will offset the intense pain and humiliation they’re about to witness on the screen. Bautista will be a witty, engaging guide through this wacky world of wipeouts, epic failure and painful realizations so viewers can learn the scientific principles that govern our physical world and see the humor in the unfortunate experiments these human “test dummies” so kindly staged for the rest of us.

Science of Stupid examines and explains the most cringe-worthy, “OMG” moments on the Internet so that we don’t have to figure them out for ourselves. As for the people who posted the videos of their failed stunts, getting the science wrong may have gotten them fame, but it also got them hurt!