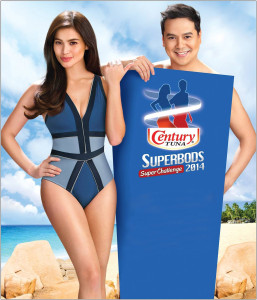 The Century Tuna Superbods is back, and it’s bigger, sexier and hotter than ever! With top actor John Lloyd Cruz joining Anne Curtis as the brand’s newest endorser, Century Tuna celebrates transformations towards a healthier, sexier body.

Happening this April 25 to 27, the Century Tuna Superbods SuperChallenge once again gathers celebrities and beach lovers in the country’s ultimate summer destination, Boracay.

The twists truly make the Century Tuna Superbods even more exciting this year, as envisioned by Greg Banzon, General Manager of Century Pacific Food Inc.: “We all know that Century Tuna Superbods is one of the most awaited summer events in the country and this year, we did our best to offer something new. By presenting John Lloyd Cruz as a Superbod, we want to inspire our loyal customers to take their own journey towards health and fitness.”

“I’m very thankful that Century Tuna chose me for this challenge. It’s inspiring because when I turned 30, my wish for myself is to be healthy. With this challenge, I am really trying to achieve a 360-degree turn in my lifestyle,” says John Lloyd.

The transformation, he explains, will provide him greater room for experimentation when accepting roles: “My body is my tool as an actor, and the roles I take are affected by how I look, including my physique. When I become a Superbod, it’s exciting to think of the roles and scenes that I can do.”

Meanwhile, her co-endorser, Anne, shares, “It’s always a pleasure to represent a product that you truly believe in that’s why I’m very happy and grateful to be chosen as Century Tuna’s endorser again. I also feel very honored to be given the opportunity to bring the message of health and fitness to more people through Century Tuna.”

Aside from John Lloyd and Anne, members of the Boys Night Out DJs Slick Rick, Tony Toni, and Sam YG were launched as this year’s celebrity challengers who will undergo the six-week challenge found in the website, which features a daily workout program and a systematized meal plan featuring the original healthy meat, Century Tuna Flakes in Oil. Century Tuna contains Omega 3, which helps burn body fat, shrink abdominal fat cells and stop certain genes that trigger inflammation on belly fat, in addition to promoting a healthy heart.

After the challenge, the BNO DJs, together with John Lloyd and Anne, will head off to Boracay for all the fun activities leading to the finals of the Century Tuna Superbods SuperChallenge 2014, a competition for males and females between 18 to 35 years old with a healthy body and passion for an active lifestyle.