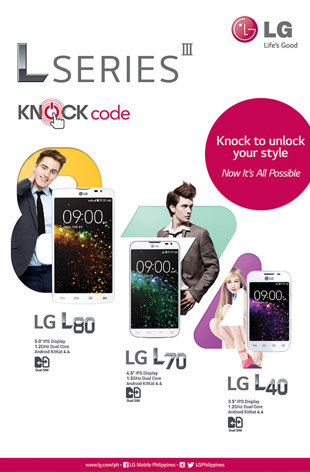 “While other sophisticated unlocking methods are only available on premium models, LG is making Knock Code™ available to a wider audience. Even mid-tier models like the L Series III will come equipped with the Knock Code™,” Kim said. “LG is really working to make smartphones more responsive and intuitive, solving security issues while still retaining the well-loved knocking gesture of the KnockON. It’s convenient, secured and fun to use.”

Other features of the L80, L70 and the L40 phones include longer lasting battery life; the Guest Mode™ which protects the user’s privacy by letting the owner create a separate user profile specifically for guest users; the QuickMemo which allows users to create personal doodles and messages directly drawn on screen; the Capture Plus™ which enables the user to save full webpage content as compared to the usual limited screen capture; and FM Music Collector which records radio hits and automatically converts them into music files. It removes the radio jock’s voice that overlaps with the song, and pre-records up to four minutes so even songs recorded starting in the middle can still be captured in full.