“Coming off my best season in the NBA and now launching the J Wall 1 that has my own logo is an incredible feeling,” said Wall. “I feel really blessed to have my own signature line and I think my fans and basketball players are going to love playing in this shoe.  It’s also a shoe with great colors and materials that you can dress up off the court which is really important to me.”

For the first time ever, the new John Wall logo is featured on Wall’s signature footwear and apparel. The John Wall logo consists of his initials, “JW” and is designed with the “J” crossing-over to the “W” to represent his quick playing style and ability to cross over defenders. The cross-over element is also representative of Wall’s off-court style and how he transitions from a fearless player on the court to a laid back, fashion forward person off the court. In addition, the “JW” within the logo pays homage to Wall’s late father, John Wall Sr., who passed away when Wall was nine years old.

“We designed and engineered every aspect of this shoe to compliment John’s quick style of play on the court,” said Robbie Fuller, Global Design Director, adidas Basketball. “Our close collaboration with John allowed us to deliver a shoe that will help him improve performance while telling his unique, personal story through the John Wall logo and details throughout the shoe.”

To compliment John’s quick, aggressive style of play, the J Wall 1 midsole features full length adiprene+ cushioning for enhanced responsiveness, comfort and superior heel to toe transition. Wall’s quick style of play is supported from the full length lateral FITFRAME which allows for a more controlled surface for Wall to plant against during explosive cuts. A unique air mesh textile upper offers supreme comfort and breathability and is finished with rip-stop overlays for enhanced durability.

In addition to performance elements, the J Wall 1 features details reflective of his game and style. These details include the John Wall logo featured prominently on the tongue, while the logo’s cross-over inspiration is carried throughout details of the shoe, including the pattern on the tongue and toe cap. The outsole features a map of the United States with “Wall” written across the left and right shoe, highlighting Washington DC with lines connecting to every NBA city on the map. Details on the map include the Washington Monument, Statue of Liberty, St. Louis Gateway Arch, Golden Gate Bridge and Seattle Space Needle to represent Wall’s fans in Washington DC and across the country. 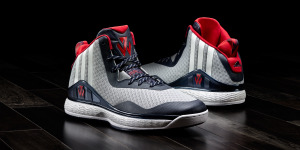 The J Wall 1 launches in leading adidas and sports stores in the Philippines on November 1 for Php5995 in two different colorways. Additional colorways will launch throughout the NBA season.

About adidas Basketballadidas has been providing innovative products for the world’s best athletes for more than 50 years, from past legends to today’s superstars, such as John Wall, Derrick Rose, Dwight Howard, Damian Lillard and Candace Parker.  On April 11, 2006 adidas and the National Basketball Association signed an 11-year global merchandising partnership making the adidas brand the official uniform and apparel provider for the NBA, the Women’s National Basketball Association (WNBA) and the NBA Development League (D-League) beginning with the 2006-07 NBA season.